← Chronic Pain Time Machine
She’ll Always be Baby to Him →

Courage in the Fire 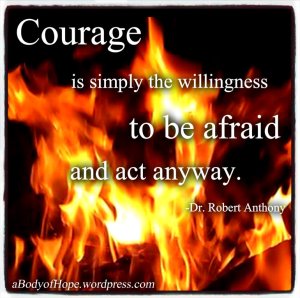 Do you remember that old children’s Sunday school story of Shadrach, Meshach and Abednego? I hadn’t really thought about it much myself over the years, but the type of pain CRPS causes-  brings up the idea of fire so often… these guys popped into my mind recently.

So, the story goes that King Nebuchadnezzar was way jealous of God and created a big sparkling golden statue. He was super proud of it and forced people to bow down to it. If not, he would chuck them into a pit of flames, historically called “the fiery furnace.” Every Sunday school kid learns that 3 guys go and stand up to the king. When they get thrown into the furnace, an angel appears and they aren’t harmed at all in the fire.

I was checking this story out in Daniel recently to see if there was something I might have missed when I was…ya know…five?

So, the king was forcing all of his top political officials to bow down and worship his big new statue. They were the typical “yes men” that we are used to today- politicians, eh? It was no big whoop for them to bow down, but some tattle tale told King Nebuchadnezzar there were 3 Jewish men working in Babylon… Snitch.

Do you think Shadrach, Meshach and Abednego heard about “Furnace-Gate” ahead of time and the 3 friends were discussing or even arguing how to handle it? I wonder if they prayed asking for strength or guidance. Maybe Meshach got cold feet and his friends had to give him a pep talk. Who knows…

What we do know is that they were dragged in front of the king while officers of the courts and politicians were all around to witness what the 3 Jewish clerks would do. Bow or burn? They didn’t JUST say “No.” These guys had major guts! They told the hotshot king that they wouldn’t even defend their reasons because having faith in their God was reason enough: “King Nebuchadnezzar, we do not need to defend ourselves before you in this matter. If we are thrown into the blazing furnace, the God we serve is able to deliver us from it, and he will deliver us from Your Majesty’s hand. But even if he does not, we want you to know, Your Majesty, that we will not serve your gods or worship the image of gold you have set up.”

Boom goes the dynamite! Oh no you didn’t! And the king was so enraged, the furnace was turned up 7x hotter than normal. The flames were so intense, a few of the king’s servants were killed just opening the door! Imagine how scary that must have been to watch other men incinerated right in front of you… These 3 guys have so much faith that God can and WILL deliver them that they just double-dog-dared the wild king Nebuchadnezzar in front of all of his most loyal men to throw them into the pit of flames. As they were being tossed into the fire like lowly criminals, hands and feet bound, a room of satisfied eyes watching… do you think they wondered why God hadn’t delivered them already? As they felt the heat and flames blinding them, they might have thought, any time would be good, Lord!

They were thrown inside of the fire to die. The door was closed behind them. I can only imagine that there were smug celebrations from the peanut gallery. Colleagues, now toasting to their own survival by placating the king. Can’t you just hear the laughter from Nebuchadnezzar’s lips? He had won. He was stronger than the God he was so tired of competing against for attention.

But wait…the king looks inside of the furnace to find no suffering, no screaming, no pain, no death. “Weren’t there three men that we tied up and threw into the fire?” the king asked. “Look! I see four men walking around in the fire, unbound and unharmed, and the fourth looks like a son of the gods.”

That’s right, not only were they completely unharmed in the fire, they were hanging out with a messenger of Heaven! Right in front of the King and everyone to see. Shadrach, Meshach and Abednego were removed from the furnace, their clothing, skin and hair inspected for any sign of burns or injury by the king and the officials. The king was completely amazed. For the first time in his life, the king praised God. He was so impressed by the faith of the 3 men so willing to give up their own lives than serve any other false idol. And the king was so overwhelmed by the magnificent miracle he had just witnessed- it changed the hearts of so many in the land.

Imagine how much courage it took for Shadrach, Meshach and Abednego to hold to their guns. These guys were just every day men. They weren’t prepping for a day like this. They were yanked out of work. What an act of bravery and faith! They had to have been so petrified. Choosing between their lives, their families, unsure of what would happen after they are gone, and knowing they might be burned alive… but it was all worth it for what they believed in. Their faith and passion was so strong. They boldly waited on an unknown miracle to save them. They believed it. Yet, they were still willing to die for their faith. Willing to risk it all because their beliefs were too important.

I keep thinking of the moments going into the furnace; they must have been wondering when the miracle was coming. God could have intervened at any point in the day to spare the guys from such a terrifying and humiliating ordeal. But, God waited until Shadrach, Meshach and Abednego were in front of a room filled with top level politicians and a king, AFTER they were thrown into a pit of fire… then an angel appeared. Because of the courageous choices of 3 men, God was able to use their lives to create a domino effect in all of the land.

Sometimes life feels like being thrown into a pit of fire. We start out with full faith, completely sure there is plan for us, but then, like Shadrach, Meshach and Abednego, the flames increase by 7 and we don’t understand where God is. It’s very scary- horrifying! The scripture doesn’t say whether or not they were frightened or worried. They were just people, so I’m thinking this was absolutely the scariest day of their lives! In the most difficult time of your own life, remember that God’s intervention and timing is perfect. You might be in the fire with the flames rising all around you, but He will be with you. At times, you might have people watching you, scoffing, but He can help you use your story to change lives and hearts. It might not be the life you planned for, but He has something even bigger in mind for you. Who knows, you might end up being a legend too!

I do not know why it is that we must wade through tragic circumstances to find truth. We nearly drown! But under the water, there are pearls. I hope in writing this blog, more will come to the surface. Over the past 15 years living with chronic pain, patient advocacy has had a powerful effect on my life through meeting so many remarkable teens, women and men: SURVIVORS. These individuals are HOPE personified. I wish to honor them in the same spirit they have encouraged me to press on. Eight years ago, I became bed-bound from a variety of secondary chronic illnesses. A procedure meant to help the pain condition I had been managing for several years- went bust #BIGTIME. Over the years, my entire life has changed. I have changed, but I am still striving to live my best life possible. Along with sharing inspiring pieces about spiritual wellness and finding quality of life inside of ongoing illness, I also share health research, awareness information, poetry, memes, art, and this blog is also an attempt to put my own pieces back together. Welcome to A Body of Hope, and thank you for visiting. [Complex Regional Pain Syndrome/ RSD, Postural Orthostatic Tachycardia Syndrome (POTS), Dysautonomia, Chronic Intractable Migraine, Cluster headache, Trigeminal Neuralgia, Occipital Neuralgia, Hypersensitivity to Sound & Light, Fibro, CFS/ME, Cerebrospinal Fluid Imbalance......blah, blah, blah] >>> P.S. My headgear is protective for pain. I just rock it hard ;)
View all posts by abodyofhope »

← Chronic Pain Time Machine
She’ll Always be Baby to Him →

Our resiliency has limits, but we can always become more resilient.

Living life with a chronic illness is definitely not easy. But I do my best to push through all the barriers this illness puts in front of me! In my heart and mind, I believe maintaining a positive outlook on all situations in life will carry us through to much better times! I hope you find the information that I provide both helpful and inspirational!